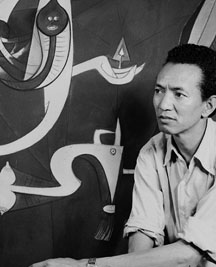 Wifredo Óscar de la Concepción Lam y Castilla (; December 8, 1902 – September 11, 1982), better known as Wifredo Lam, was a Cuban artist who sought to portray and revive the enduring Afro-Cuban spirit and culture. Inspired by and in contact with some of the most renowned artists of the 20th century, including Pablo Picasso, Henri Matisse, Frida Kahlo and Diego Rivera, Lam melded his influences and created a unique style, which was ultimately characterized by the prominence of hybrid figures. This distinctive visual style of his also influences many artists. Though he was predominantly a painter, he also worked with sculpture, ceramics and printmaking in his later life. Provided by Wikipedia
Showing 1 - 2 results of 2 for search 'Lam, Wifredo, 1902-1982.', query time: 0.01s Refine Results
1