Emilio Pettoruti (1892–1971) was an Argentine painter, who caused a scandal with his avant-garde cubist exhibition in 1924 in Buenos Aires. At the beginning of the twentieth century, Buenos Aires was a city full of artistic development. Pettoruti's career was thriving during the 1920s when "Argentina witnessed a decade of dynamic artistic activity; it was an era of euphoria, a time when the definition of modernity was developed." While Pettoruti was influenced by Cubism, Futurism, Constructivism, and Abstraction, he did not claim to paint in any of those styles in particular. Exhibiting all over Europe and Argentina, Emilio Pettoruti is remembered as one of the most influential artists in Argentina in the 20th century for his unique style and vision. Provided by Wikipedia
Showing 1 - 6 results of 6 for search 'Pettoruti, Emilio, 1892-1971.', query time: 0.01s Refine Results
1 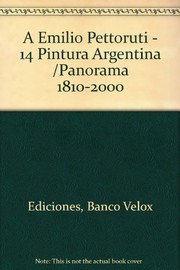